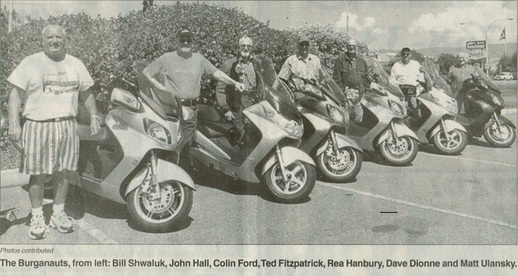 http://www.jurassicriders.com/next-rideluncheon.html
The following is a reproduction of a newspaper article from OUTDOORS OKANAGAN Saturday, AUGUST 5, 2006

​Suzuki bike has a dedicated following in the Okanagan
By  J P SQUIRE
The eye-catching line of futuristic-looking motor­bikes outside The Bay restaurant was too much to resist.  Just the way they were so carefully parked at Orchard Park Mall in Kelowna meant these owners knew each other and they obviously all had the same taste.
​
All but one were Suzuki Burgmans, in both 400- and 650-cc models. The most eye-catching was the brand-new Executive.

​Obviously missing from the left side of these bikes was the usual foot pedal to shift gears. Instead, there was an almost scooter-like foot rest on both sides.

That aerodynamic smoothness extended from the molded dashboard to the rear housing which no doubt had a trunk instead of the usual saddle­bags of the cruisers.

Without difficulty, five men with grey to white hair are spotted just fin­ishing their coffee and within minutes, they are introducing themselves as the "Burganauts" and telling motorcycle stories.

This informal group of nine men total is not only passionate about riding motorcycles, but about "a particular model and type of motorcycle that matches our riding style," admitted Ted Fitzpatrick.

The Suzuki Burgman was introduced to North America in 2003 and has remained surprisingly low-profile, although this Kelowna group has been assured by industry insiders that its features will soon take over the recreational motorcycling field.

Its major attraction for non-motorcycling enthusiasts is a computer- controlled automatic transmission, though operators can also shift from one gear to another with the push of a button without worrying about a clutch - if they even miss the old gear-switching routine.

It also has a low centre of gravity for those who loath the cumbersome weight of larger bikes.  The gas tank and engine/transmission package are about as low to the road as you can get.  Gas mileage ranges from 60 to75 miles a gallon.

It also has power. plugs for accessories like GPS.

The Executive has ABS brakes, electric retracting rear-view mirrors and an electrically operated windshield which raises and lowers, depending on how much of a breeze the operator prefers.

"It has massive storage, enough for a six-pack and two full-face helmets," said Dave Dionne, joking: "I've tested it."
And in inclement weather, you don't get wet as a result of the aerodynamic shape - unless you stop, said Matt Ulansky, a retired builder with 40 years in the business and nine arterial bypasses in two surgeries.

"We get a lot of looks.  People have never seen a bike like this before.  We're always peppered with questions," said Dionne, who owns the smaller 400-cc model after nothing but big bikes.

"Basically, it's the fun factor."

When he went into the Valley Motorsports Suzuki dealership, he made it clear: "I'm looking for a hog." When "a scooter" pulled in, a salesman suggested he try the Burgman.

"No thanks," was his response, but a 20-minute ride up the Okanagan Connector and he bought it.

Between May and November last year, he put on 17,500 kilometres and, is up to 29,000 in his second year. Fitzpatrick has travelled 11,000 kilometres in his first two months.

They brag they usually ride year- round, thanks to heated vests, cloth­ing, gloves and grips. Dionne remembers he and Fitzpatrick getting caught in a snowstorm on the Connector in October.

Fitzpatrick is now on his third Burgman; it's the same for former Olympic weightlifter/businessman Bill Swaluk.

"I had a Harley and dozens of others, but I've had more fun on a Burgman than any other bike I've owned," said Fitzpatrick. "These other guys have the same sentiments.

It's great for a variety of riding, touring or cruising. It's low-maintenance, high-tech, very reliable, versatile."

"It's amazing how a bike brought all of these unique people together," said Fitzpatrick.

One member, John Hall, a retired university art professor, is currently busy headlining a show at the Penticton art gallery.

Fitzpatrick recalled a nine-day trip to Yellowstone by three members, cruising the Interstate 90 at 140km/h and the Beartooth Highway at elevations of up to 11,000 feet.  And Dionne a four-day trip through Washington State which cost him $48 in gas.

The group meets at The Bay restaurant at 9 a.m. every Thursday, rain, or
shine, and sometimes doesn't decide where to ride until they get on their bikes.  Often, it's a unique spot only a few know about.

Today, they're heading for Penticton to meet another Burgman owner who has proposed a trip to Jasper in September.